Is this your Bitcoin?

As cautious as a BTC bull
Bitcoin déjà vu, anyone? The most prevalent cryptocurrency by full market cap ($290.5bn, according to recent CF Benchmark data) has yet to reach ardent peaks near $20,000 from December 2017, but aspects of the same heady atmosphere as then, around crypto, Wall St. and Main St, are making a return. Whether it’s a more agitated than usual ‘crypto Twitter’, or the reappearance of unknown ‘experts’ on CNBC, there’s been ample room for wariness. It helps explain why prices have, in fact, paradoxically betrayed hesitation. Yes, buyers have vaulted milestone after milestone, taking our Bitcoin Reference Rate (BRR) from $10,048.42 on 7th September, to $18,110.09 on Thursday, a crypto-esque return of 80% in 11 weeks. But check out the numerous failures to hold $18k this week. At the time of writing, our Bitcoin Real Time Rate was again fluctuating between $17,900 and $18,000. Futures and options open interest remained near year highs and all-time highs respectively. Such data demand cautious interpretation, but the tell-tale options put/call ratio was at 0.79 vs. 2020’s most elevated level of 0.8 on 7th May (according to data from Skew.com) betraying a bearish bias. The BRR rate settled at $9,517.05 on that date, preceding a suspenseful dip in days that followed. It would be remiss now to predict the definitive direction to come, but just as incorrect to declare an unreconstructed bull. A more mature one than 2017, this time, perhaps.

KuCoin recovers, OKEx resumes, Binance sues
Meanwhile, news about exchanges marked by regulators as problematic, continues to be mixed. KuCoin, in Hong Kong, signalled that the resumption of normal service would be complete in coming days after recovering over 80% of funds (worth some $236m) bilked in September. Still scant explanation nor assurance, mind. OKEx was set to unfreeze customer withdrawals a month after a suspension that was accompanied by rumours of a senior executive’s arrest. Customer facilities should normalise on 27th November, with funds “100% covered” following the end of a regulatory investigation in China. Binance is suing Forbes for defamation.

Ethereum highs and lows
Ethereum joined Bitcoin in setting 2020 highs, belying notions that wild growth of ERC-20-focused DeFi could drag ETH. The frequency of hacks punctuating the yield casino hasn’t diminished, though. Plus, after two bugs emerged in one week earlier this month, one critical but resolved, the remediating benefits of Ethereum 2.0 can’t come soon enough. Thankfully, transition to proof of stake received a shot in the arm from Dubai’s IBC Group staking 21,984 Ether, worth c. $10m. With just over 10% staked before ‘Phase 0’s December launch, hitting the schedule is still touch and go.

The Returns: LINK-USD
Soon to be added Ultra Cap 5 constituent LINK is sitting on triple percentage-digit returns since launching 3 years ago. The pace has paused over the last couple of months, according to our LINK dollar Reference Rate. Since 5th August, it has gained ‘only’ 45.55%. 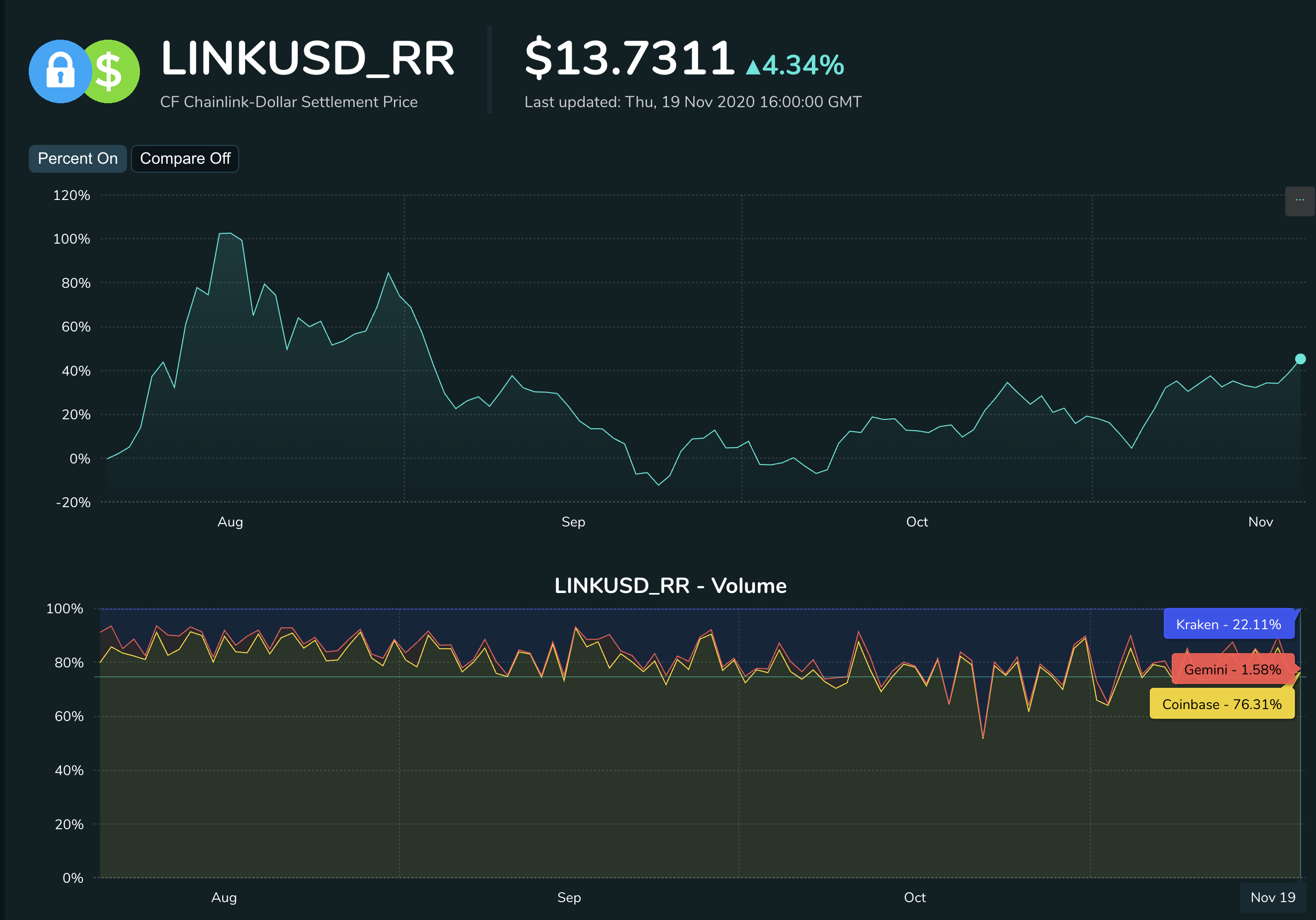 Review, remake
CF Benchmarks’ Ultra Cap 5, the only regulated benchmark index for the cryptocurrency market, just had its first constituent review. And, as the index duly adheres to its transparent, rules-based methodology, a change in its constituent members has emerged in line with changes in the market value of top cryptocurrencies.

As for the market itself, Bitcoin’s months-long parabolic surge might well be in the mainstream spotlight, but the crypto industry has been abuzz with the price rallies of all major tokens over the last several weeks.

This fervent atmosphere has of course been fuelled by the reflexive impacts of muscular advances by all ‘risky’ assets (for instance, stocks) of which major cryptos are increasingly a part, as the stimulative global response from central banks and governments to the pandemic shows strong signs of feeding directly into the digital asset space.

It was almost inevitable that one of the myriad multibillion dollar-capitalised cryptos outside the Ultra Cap 5 would supersede one of the current constituents, Bitcoin, Ethereum, Ripple, Litecoin and Bitcoin Cash. And that’s exactly what’s happened.

The Rules
It’s worth noting that being a crypto possessed of a market value that places in the top 5 digital assets isn’t sufficient qualification to join the only benchmark index for this asset class. Because CF Benchmarks is a Benchmark Administrator authorised by the FCA under the EU’s European Benchmarks Regulation regime (and will remain so after Brexit) we have a responsibility to ensure that only markets that are sound and that can be adequately monitored can be included in the Ultra Cap 5 Index. Here’s our Benchmark Statement (PDF), and a set of rules (PDF) governing the construction of the Ultra Cap 5.

Forked again
Bitcoin Cash has been at it again. Since splitting from Bitcoin in 2017, it has been the only one out of around 100 Bitcoin spin-offs to have survived for more than a month. It remained unscathed after a further split in 2018, resulting in the creation of Bitcoin SV.

Disagreements over a cryptocurrency protocol upgrade can sometimes force a split (or ‘fork’) in the blockchain, essentially resulting in the creation of a new chain and a new crypto.

In an overly compressed nutshell, as part of a new policy change, an 8% surcharge was proposed on mining the crypto with the sixth-largest free-float market cap (of $3.350bn as of CF Benchmarks’ end-October data).

Whenever such policy changes occur, some parties involved in maintaining the blockchain may disagree with it. They may wish to maintain the protocol as it was (or go in some other direction).

Read the rest of this article here.