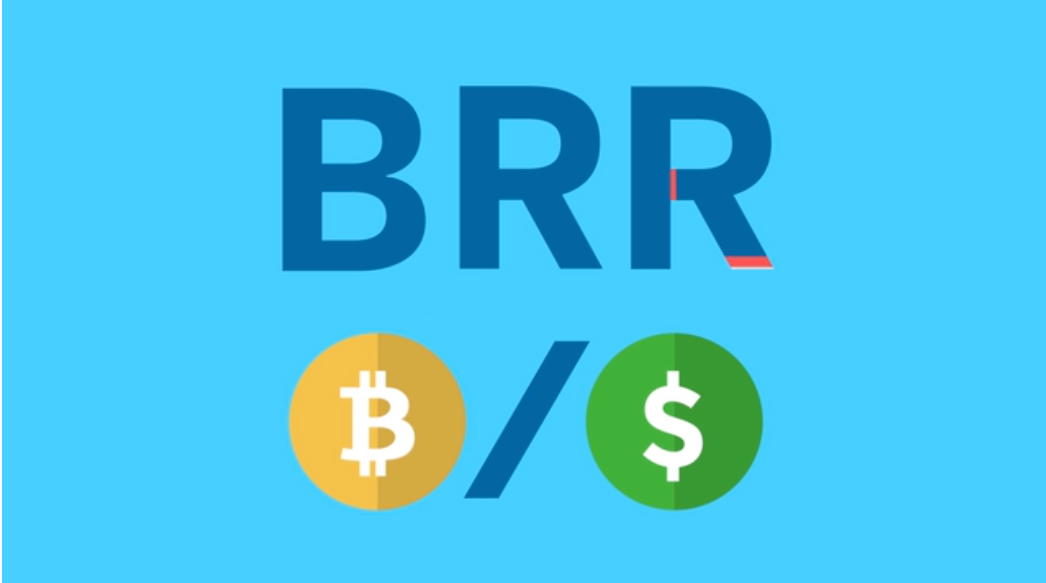 Those familiar with the research on the CME CF Bitcoin Reference Rate (BRR) published last year probably won’t be surprised that an update of the analyses based on more recent price data corroborates the original findings.

Still, it was an update well worth doing.

For one thing, with the earlier BRR Constituent Exchange data covering the stretch between January 2019 to November last year, the time elapsed since then obviously offers a rich data seam to be mined, particularly given Bitcoin’s near-500% return between October and March.

More to the point, taking the opportunity offered by the passing of time to update the analyses would strengthen the conclusions drawn in the December paper, regarding the market integrity, representativeness, and replicability of the BRR.

Ultimately, demonstrating that the BRR continued to meet the most stringent standards of those qualities underpins the stated aim of the research in the first place: to validate the BRR as a superior reference price for providers of regulated Bitcoin financial products, chiefly ETFs.

In fact, since the initial publication, several ETF providers – like Evolve in Canada and QR Asset in Brazil - have affirmed the BRR’s watertight qualities by launching Bitcoin ETFs based on the BRR. Others have applied to regulators to launch Bitcoin ETFs based on the BRR, or one its regulated benchmark sister indices, like the CF Bitcoin Settlement Price (US Close), with which WisdomTree will power its WisdomTree Bitcoin Trust.

As well, the largest and most established institution with products referencing the BRR – the CME Group, with its Bitcoin futures and options contracts – has announced that it will launch Micro Bitcoin Futures (MBT) in May. One-tenth the size of CME’s existing Bitcoin Future contract, MBT will offer increased efficiency and cost effectiveness to institutional traders whilst also providing easier access to individual participants.

The steady increase of assets referencing the BRR is a further reason to re-examine the capabilities of the regulated benchmark with updated data.

Thankfully, the latest data reconfirm that the BRR is a solid benchmark price on all three of the crucial qualities examined in the original paper and the updated version:

We defined those qualities as ‘Representativeness’, ‘Integrity’ and ‘Replicability’. The research determined how well the BRR matches the most stringent standards of these qualities by means of quantitative analyses. The data were then summarised in several tables. We’ve excerpted a few of them below and added some explanations.

Though the BRR’s potentially erroneous data parameter (PEP) is a contingency that CF Benchmarks hasn’t needed to use since January 2019, it serves as a useful threshold for quantifying market and price integrity. PEP is one of myriad safeguards deployed as integral aspects of the BRR’s benchmark methodology. The parameter mandates that if an instance of a Constituent Exchange’s volume-weighted median price deviates more than 10% from volume-weighted median prices of other Constituent Exchanges, then prices from the Constituent Exchange in question are excluded from index calculations.

For sure, a potential trigger of the PEP might turn out not to have been due to market manipulation. But the standards that CF Benchmarks holds itself to – as befits an EU-authorised Benchmark Administrator—require a response that eliminates risk of a nefarious cause. As such, the data in table two confirm that the PEP hasn’t been triggered for over two years whilst showcasing tight spreads between Constituent Exchanges; as well, the readings are a strong indication of the BRR’s market integrity.

Likewise, an analysis that was intended to expose the degree to which each individual Constituent Exchange was correlated individually with all other Constituent Exchanges produced results that were just as striking in the updated research as from the initial data. The approach is called a pair-wise correlation and it could reveal inconsistencies—even potential manipulation—within Constituent Exchange prices that might not be spotted within the BRR index value itself due to the aggregated methodology of its construction. 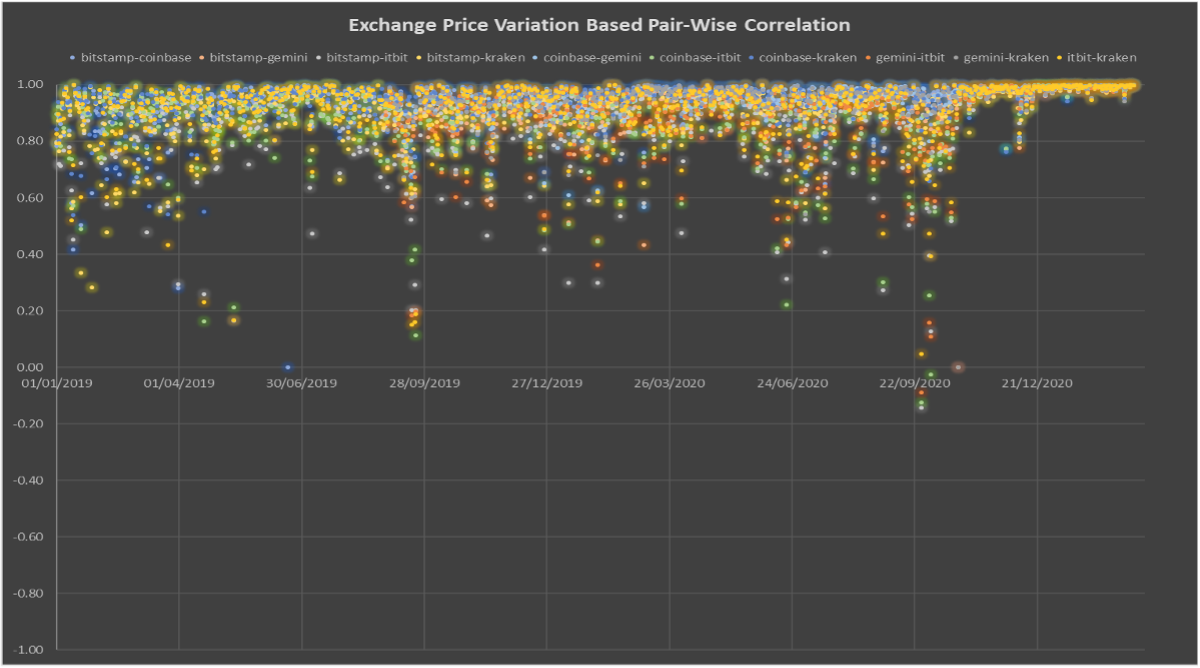 The scatterplot in Figure 1 charts all possible pair-wise correlation values daily between January 19th, 2020 and February 28th, 2021. Quoting from the paper: “The clustering towards correlation coefficients of 1.00 and less than 1% of days when any exchange had a correlation with another exchange below 0.5 demonstrate strong price correlation between the Constituent Exchanges.” This represents compelling evidence that the market integrity of the BRR continues right down to the level of each individual exchange. 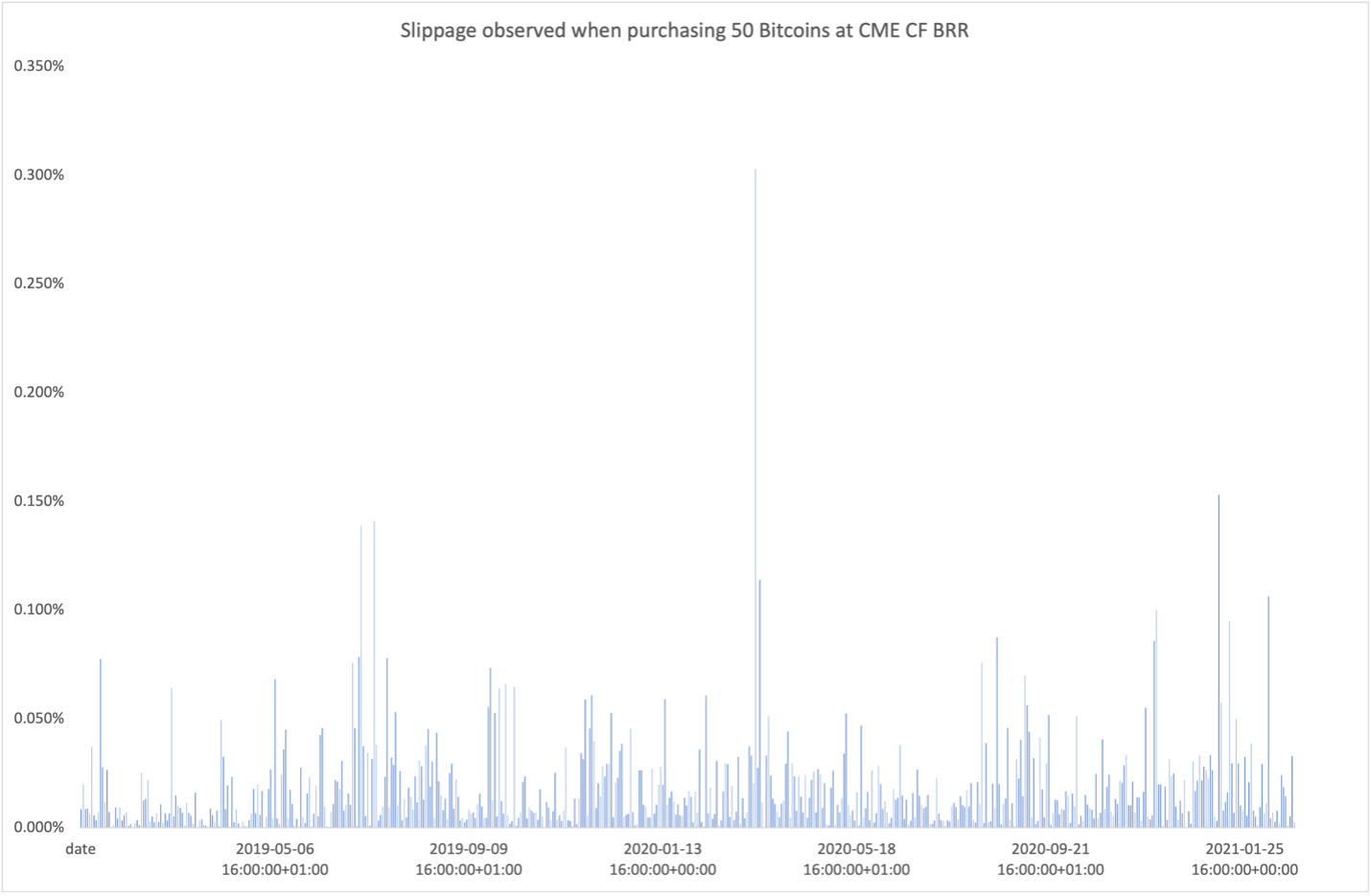